The week of 13-19 May 2019 was Mental Health Awareness Week, organised by the Mental Health Foundation. Being open about mental health issues is something very close to the heart of Quilter CEO Paul Feeney. Here is what he has to say about the way big business should deal with the issue and why.

Across the City I believe that employees still fear if they talk about their mental health then their boss will think they lack ambition. Some may even fear losing their job. The stigma around mental health in big business is symptomatic of a macho culture where ignorance and bias still exist and that's got to change.

I’ve had my own mental health issues in my life, which stem from childhood and it took me two decades to seek help.

De-stigmatising mental health requires cultural change in business. That can be challenging in industries like financial services that are characteristically target-driven. I often joke that business leaders in the square mile won’t improve the wellbeing of their people until they see it measured on a graph.

In fact there is data that suggests measurable improvements in staff wellbeing do indeed translate into better business performance.

Research from Accenture of 2,170 working men and women across the UK revealed that two-thirds have personally experienced mental health challenges.

Mental health difficulties are often related to workload, work-related stress, and can be the product of a success-at-all-costs philosophy. But a culture of cut-throat competitiveness that views burnout as a benchmark of dedication is unsustainable and unacceptable.

A workplace culture that pressures employees to hide mental health issues is toxic and has potential to do enormous damage not just to those employees but to the business itself.

I have been lucky to work in high performance teams, full of highly intelligent people. They are driven and competitive, but the best performing teams I’ve worked in have also been open and supportive.

Sadly this is not universally the case.

Research at the end of last year from the Chartered Institute for Securities and Investment, the professional body for those working in wealth management and capital markets, revealed only 46% of financial services staff would be confident talking to managers about mental ill health. Of the 3,686 respondents, 23% said they were unsure and 31% said they were not confident talking to their managers if they felt they were suffering from stress, anxiety or depression. I believe this boils down to a fear of showing vulnerability. And in the alpha culture of big business, vulnerability is often mistaken for weakness. Regrettably, I think the same is true when it comes to stigma around physical disability or admitting to feeling bullied or harassed at work.

For our businesses to flourish we have to let our people know that it is ok to not be ok, and that admitting you need support won’t be held against you.

There are wider efforts being made by employers and the City to tackle the problem, including the Lord Mayor’s This is Me campaign and the Time to Change Pledge, which urges firms to change how they think about mental health and better support staff.

I’ve shared my story openly with my employees because I want them to know they work in a place where it is ok to not be ok – and it’s also ok to talk about it.

This is not philanthropic, it's hard business. A healthy workforce equals a wealthy company.

At Quilter we have our own initiative, called ‘Thrive’. Its purpose is to create the environment where our people can thrive. As leaders it’s our job to create the culture in our business. We all spend so much time in corporate life striving for what we can be. It’s time to strive for who we can be. Ultimately it’s a choice that will define us all.

Paul Feeney is CEO of Quilter 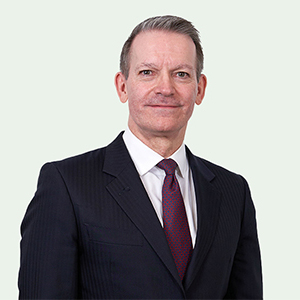 Skills and experience: Paul Feeney is an experienced, entrepreneurial leader, having held various senior business roles in large international financial services businesses, including as CEO of NatWest Private Bank, and NatWest Investments USA, Group Managing Director and Head of Distribution for Gartmore Investment Management, and Global Head of Distribution at BNY Mellon Asset Management International. During his career, Paul has developed a deep understanding of the challenges, risks and opportunities faced by the industry, thereby enabling him to create and develop the vision and strategy of the Group. Paul’s strong commercial acumen and dynamic leadership style allow him to effectively oversee the execution of our strategy.

Other appointments: Paul is the Deputy Chair of the FCA Practitioner Panel and was a Non-executive Trustee of Sense International until February 2019.